About Networks, Self-Efficacy And Compassion

About Networks, Self-Efficacy And Compassion

We are at a point where deep ecology, a grounded spirituality, a properly understood intersectional feminism, a social utopia, and the heart in the right place could save our collective skins. We must write new collaborative history(s), dare new forms of living together.

When I was in my early 20s, I had a little something of a deer fawn. I was very slender, had long, spindly legs that didn’t carry me quite securely, and felt very, very alone. That’s why I was searching. My big, rescue-seeking eyes triggered many a rescuer’s impulse and I was often in strong arms, only to continue my searching again after a short time, restless. Because as early as then, I did not want to be saved.

I searched for meaning like an animal searches for food in the forest.

I was in search of something that really promised salvation, that healed the pain, something that went deeper than a short-term good feeling. I didn’t find it in the knowledge at the university, not in the consumption of things, not in the choices of goals and resumes that were available, not in the small talk, and not in the sex with my equally lost fellow students. 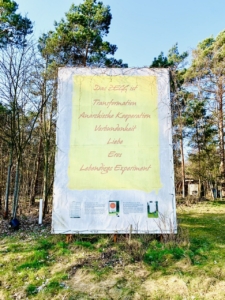 It was precisely during this time that I came across communities and social utopias. I was unaware until then of those places that not only talk about necessary changes, but live them. A meaningful vision on ecology, politics, body, community, spirituality, love and sex; all thought into one – that was the nourishment I was seeking. I visited the Center for Experimental Social Design (ZEGG for short) near Berlin. I spent several years in somewhat close touch with this community. I have never lived there. Regrettably, already in 2000, when I came there as a student, the gender image and the ideals of an (exclusively heterosexual) vision of love were so outdated that I did not feel my reality and vision could be implemented there.

Nonetheless, the knowledge I was able to gain there has deeply influenced my life, my way of loving, and all of my work. As a sex worker and sex educator, I embody the vision of a sex-positive joyful and loving culture for all genders. A culture that leaves guilt, shame and censorship behind. A culture of permission and attentiveness, of play and the pleasure of surrender and ecstasy. I am already shaping a community based on shared values: Consensus, Compassion, Communication.

I often guide people on their own body’s internal battlegrounds. I mediate, I help with the negotiations. I show paths that lead to cooperation and trust, to a practice of love. To one’ s own body, to one’ s own feelings, to one’ s partner, to the world.

Sex work can be peace work in this sense. The more I become embodied, the more I can feel and sense, the less I am willing to use or endure violence. Towards myself and to my environment.

I see myself as a peace worker and could therefore never understand my work in any other way than politically, even if it does not take place at conference tables, in plenary halls, in occupied houses or on the streets with leaflets or throwing stones. But between rumpled sheets, in candlelight, in leather costume, in negligee or naked, tied up or not, with welts and without, touched and held, ejaculating, no matter what sex or genitals, breathing loudly, resounding and cheering with pleasure. I have experienced countless moments of liberation, I am a midwife for births of inner children who tumble into the world like spring hatchlings and need attention and room to play.

But is that how I can have an impact? Be effective? Political? How do I distinguish between hedonism for its own sake and contributing to a better world? How do I discern real growth from self-referential navel-gazing? And how do I actually want to live, what is my own concept of happiness and fulfillment? When and where am I “human among humans” , when and how am I held and seen? How can I live sustainability? Where do I refuel my knowledge, my deep feeling that all this makes sense, and that I am making sense? What was that again about community and why is it important? How to find support? 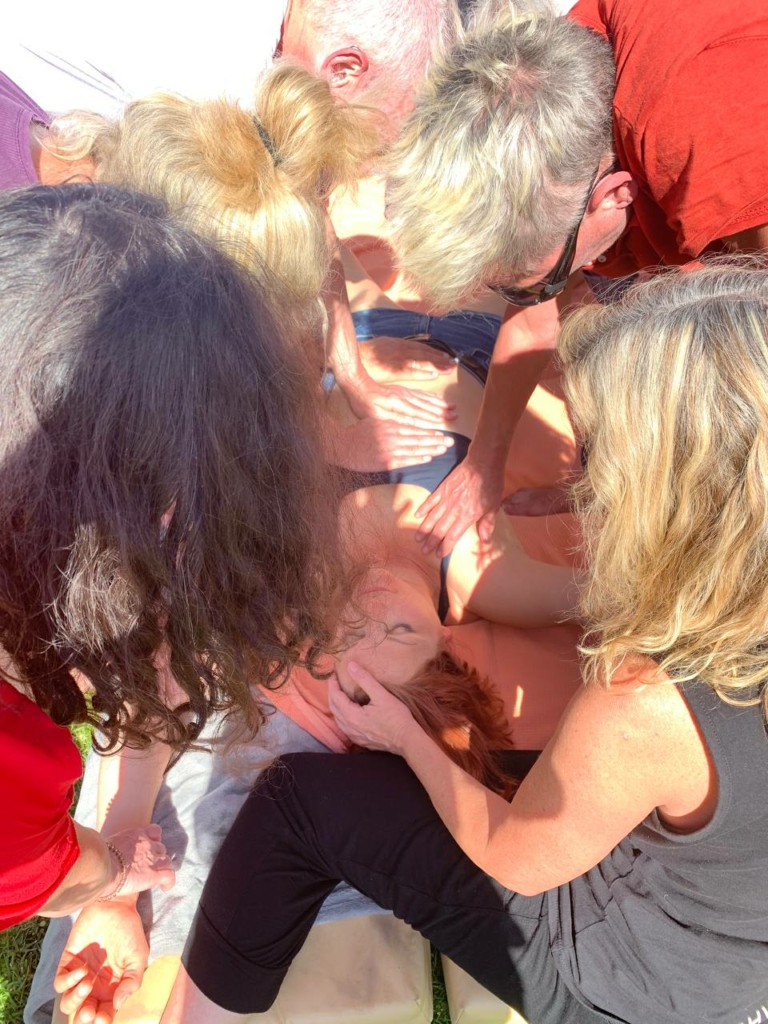 Some of the questions we struggle with originate not only in our own little biographies, but are historical or cultural. We can’t change the world in endless therapy sessions. We must write new collective history(s), dare new forms of living together: healing in this sense is political, cannot be anything else….

To refresh my memory, I went back to the ZEGG community for a long weekend. I wanted to educate myself deeper: the “forum” is an intense form of gathering; which makes transparency, compassion and visibility possible.fusion_text: content I use this form myself in my work because there also a temporary and nurturing community is created. Every community holds the inherent potential to see and to be seen. That makes us human and makes change possible.

The “forum” is a way to get to the core of one’s being and make it visible to the community – with all the layers that lie on top of it: Envy, fear, jealousy, need for recognition, lack of self-worth, anger, arrogance, defensiveness.

Compassion means: I know that this part also exists in me. I therefore thank you for your honesty. When you heal it, you heal it for me as well. That is why I am willing to support you in this, instead of devaluing you for it, laughing at you, or seeking to gain an advantage by seeing when you are weak. This is how solidarity works instead of competition. This is how compassion works instead of exclusion. This is not a “soul striptease” for its own sake. It’s about knowing that I am one of many.

When I go into transformation, when I change, under witness, it moves the field. Everyone has a chance to change alongside me. That’s why group makes sense to me. We need the collective to collectively change things. 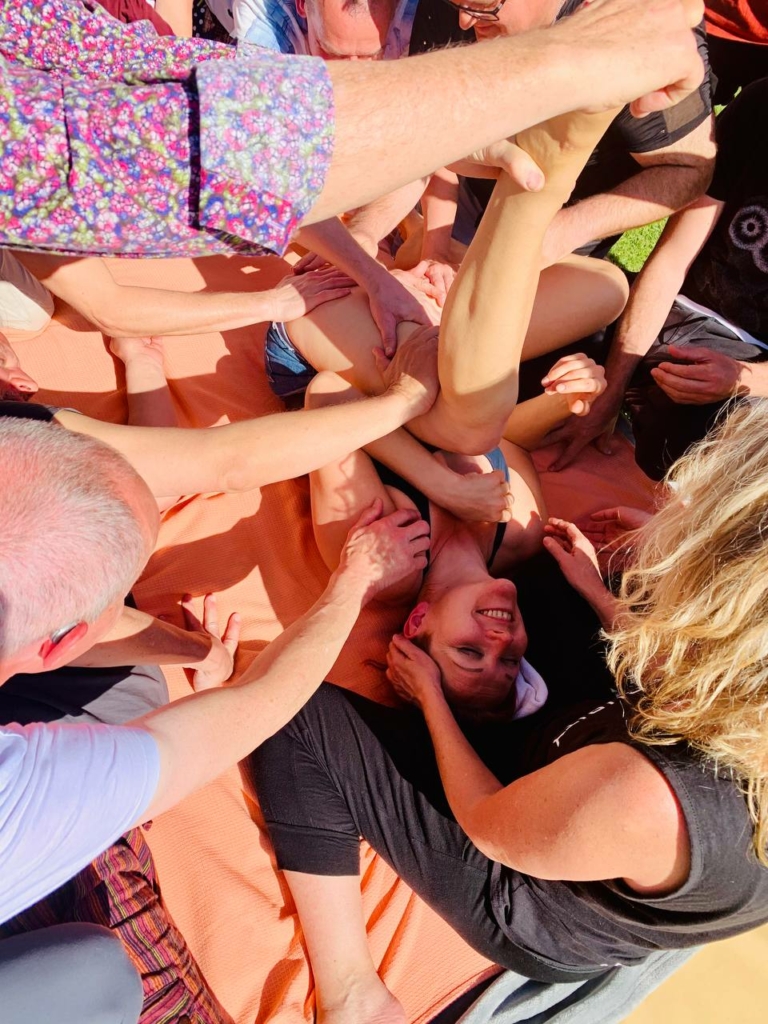 Sounds like eco-romanticism, leftism and a bit of esotericism? Well, yeah. Still, I think a vision for this is so painfully necessary that we can’t afford to laugh cynically about it. From what position of superiority?

We are at a point where deep ecology, a grounded spirituality, a properly understood intersectional feminism, a social utopia, and the heart in the right place could save our collective skins. Today, more than ever, we depend on people to at least contemplate the possibility of truly living in peace, with themselves, with the environment, and with others.

Before the planet burns or is blown up by one of the insane, narcissistic autocrats. One thing that helps: it’s extremely motivating to make the world a better place.

And it is encouraging to stand up for the values we want to live for and with. And its an act of awakening to create a truly better world instead of just “solving” an individual problem and circling around yourself. And it’s a good feeling to know that I don’t have to do all this alone.

There are knowledge resources and there are movements that people can join. Ecological movements, political movements, charitable organizations. There are places where bodywork is practiced and healing happens. There are communities with enormous knowledge towards a peaceful culture. And sometimes it’s enough just to think your way inside the network.

As soon as I understand that I am a human being among humans, it soothes my nervous system. That fact changes the way I think and act, because I don’t just think for myself – I have responsibility.

After this weekend, my eyes are wide open again and my vision is crystal clear. Real perception must also be physically felt. I remember: I am effective and my decisions make a difference. They can transform the world and make it a more peaceful place. And: Trust is achieved by opening up. The first step is as simple as that. 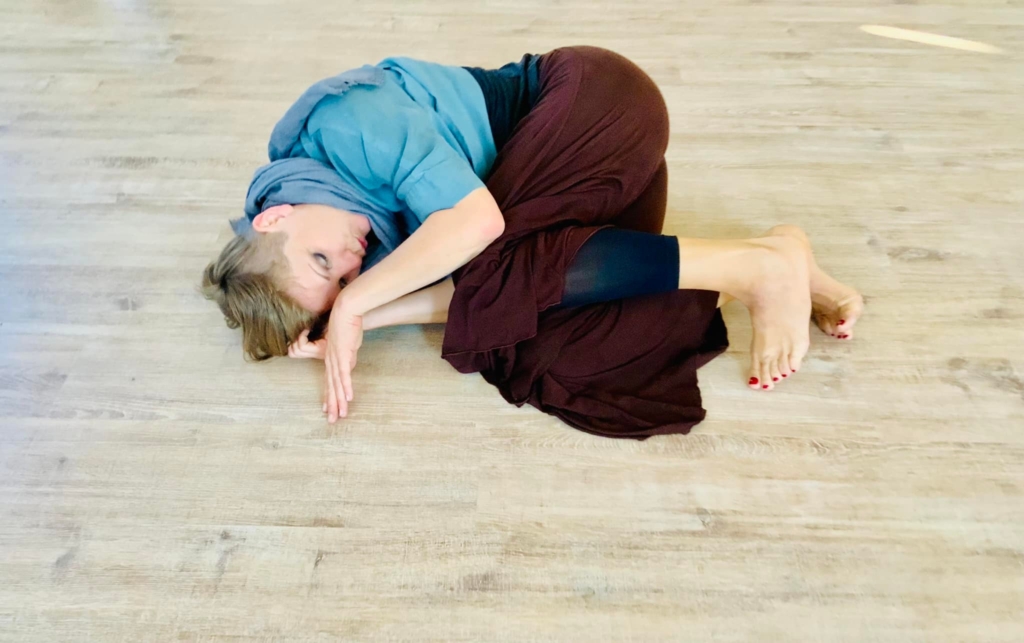